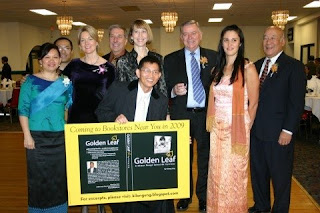 On December 27, 2008, the Cambodian-American Community of Oregon (CACO) hosted its 6th Annual Khmer Heritage Night. Leading up to the event, Portland was hard hit by an arctic storm that left more than fourteen inches of snow on the ground for about a week. The event was nearly canceled but successfully drew about 400 people including local public figures such Mayor Tom Potter and Sho Dozono. One of my personal guests was Jigme Topgyal (an exiled Tibetan who met His Holiness the Dalai Lama in 1959 in a refugee camp and a key person who helped bring His Holiness to visit Portland in 2001). My guests also included Filmmaker and Humanitarian Tiara Delgado (whose one of her documentary films Fragile Hopes was narrated by Actress Susan Sarandon).

At the opening, I gave a reflection as follow:

So, I encourage you to reflect on who we are individually and who we are as a community.

I was a leaf at the mercy of the wind. The wind carried me from one remote part of the world to another. It blew me through turbulence and catastrophic weather. It took me to the Khmer Rouge labor camp and lingered for an eternity. It dehydrated me and nearly starved me to death. I helplessly watched the most devilish mother of all winds crush my tree into lifeless pulp. Like an almighty Olympian god, when the wind wanted to toy with me, it blew me through minefields, rockets and bullets. While two million leaves disintegrated, I persevered. Through an extraordinary journey, I discovered myself. I am fortunate, and I don’t easily perish. I was a golden leaf. Against all odds, I survived, laid down roots and became a tree.

That makes us a community of trees…a forest…and a force that makes the world a better place.

Photographer Charles King took this picture during the Khmer New Year at Portland State University. The event was sponsored by the Cambodian Dance Troupe of Oregon and the PSU Cambodian Student Association on April 12, 2008. 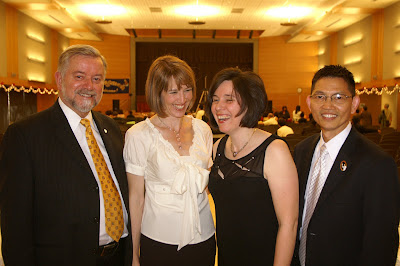 My visit to the White House

In March of 2008, U.S. Ambassador to U.N. Sichan Siv gave his presentation at the White House. He invited me, and I went: 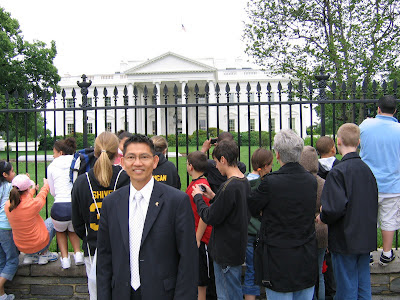 Below is a picture of me inside the Old Executive Office posing with Ambassador Siv and his wife: 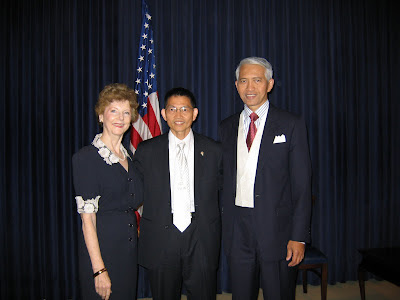 This was where I stayed: 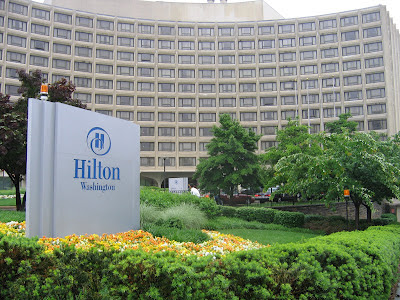 To learn more about Ambassador Siv, visit http://www.sichansiv.com/.
Posted by Kilong Ung at 12:26 AM

4th of July is a special day for Americans to celebrate America’s independence from Britain. Unfortunately, the fireworks can easily trigger terrible fear, anxiety, loneliness, horrible memory, depression and insomnia for those who have lived through combat zone and now suffer from Post Traumatic Stress Disorder (PTSD). I am one of those people. I have lived through the war in Cambodia before the Khmer Rouge took over Cambodia and during the invasion and occupation of Vietnam in Cambodia after 1979.

I am blogging at this moment because I just got woken up by the bangs of the unofficial fireworks in the neighborhoods. Now I am having trouble going back to sleep. The more I tried to force myself to sleep the more I am awake reliving my memory of the Khmer Rouge genocide which killed two million Cambodians including my parents (who were starved to death).

Leading up to tonight I was well prepared to cope with the fireworks.

Having marched in the Hillsboro 4th of July Parade this morning (as a Royal Rosarian), I was exhausted and went right to sleep after watching the fireworks tonight. I did it. I managed to prevent the fireworks from becoming a powerful trigger to my PTSD.

Yes, I did it… until a bang woke me up. My heart was pounding involuntarily. Not fully awake, I thought I was in the middle of a combat zone. The presence of the supposed bullets and rockets were momentarily real to me. My horrible memories of the Khmer Rouge labor camps and genocide haunted me.

I am having a headache and my brain isn’t working. I am very tired but cannot fall asleep. I feel like I am in a combat zone. My only comfort is my belief that I am coping better than most of my fellow PTSD victims especially many American veterans. As I know that tomorrow will be a great day for me despite tonight’s nightmare, my heart goes out to those who may not be able to see tomorrow in the same light as I. 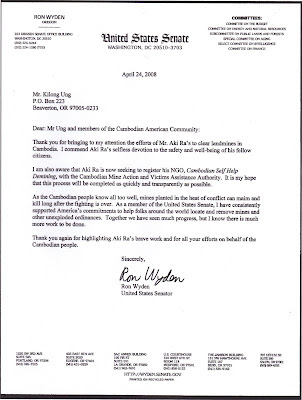 (In the future, please call me Kilong).

Thank you for your help. Please pass on my gratitute to Senator Wyden. His letter is helpful in empowering Aki Ra and the Cambodian Self Help Demining (CSHD) to be a big part of a force that makes the world a better place.

--
Kilong Ung
http://kilongung.blogspot.com
Leverage the past to make the world a better place, one person at a time. 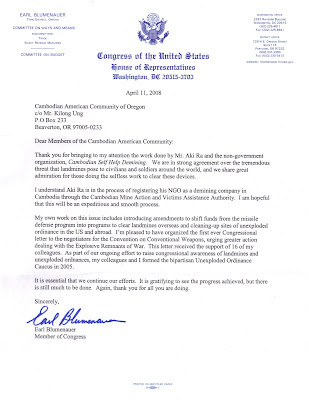 I slept exactly one hour last night... and it paid off.

By the end of today, I will have in my hand a letter with Congressman Earl Blumenauer's signature and letterhead to endorse Aki Ra's effort to clear mine and UXO in Cambodia. I could not have achieved this endorsement without your visibility and credibility.

My personal thanks to all of you who work very hard to keep CACO the talk of the town.

From the bottom of my heart, I am dedicating this particular achievement to CACO Founder, Past President and Board Director Choeun Neou. I began this effort with Rotarian Bill Morse and Synergy Consulting President Christine Chin Ryan about the same time that bong Choeun was planning his major surgery to remove a chunk of his infected intestine. Right off the bat, I had this dedication in mind. This dedication is a part of the force that drove me to work hard to achieve this endorsement.

Our community owes a tremendous gratitute to Christine Chin Ryan who was instrumental in convincing Congressman Earl Blumenauer. I had the pleasure of meeting one of Congressman Earl Blumenauer's director Joyce Flemming. I believe our community has gained another compassionate and powerful friend. Last but not least, we owe our gratitude to my fellow Rotarian Bill Morse who is in Cambodia right now helping the Cambodian Self Help Demining and Aki Ra who puts his life to save others by clearing mines and UXO.

Today is our Cambodian New Year's Eve, and I hope (my New Year wish) that this incredibly good news for our community is just a starter of the bigger and better things coming our way. CACO has a lot to protect and a lot to gain. With the most energetic executive team ever, CACO right now is in the position to make the world a better place, one NGO at a time.

Let us keep bong Choeun in our thoughts and prayers...
Let us unite, preserve and empower...
Let us leverage our past to make the world a better place...
Let us be the talk of the town...

--
Kilong Ung
http://kilongung.blogspot.com/
Leverage the past to make the world a better place, one person at a time.
Posted by Kilong Ung at 1:04 AM

From the Khmer Rouge Killing Fields to the voting booth

As an immigrant and a former Cambodian refugee, I am dismayed by how often my fellow immigrants and former refugees told me that they are not registered to vote. “Leave it to the politicians” was the frequent view on the voting. Furthermore, there are registered voting immigrants who do not vote – squandered privileges. 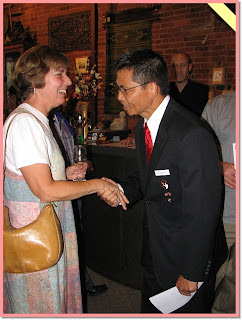 Last December, my 10-year old son and I took a taxi to meet my wife and my 8-year old daughter at my community’s annual banquet. I have taught my son to appreciate his privileges as a born American. He has been following the 2008 election and developing some interest in exercising his voting right when he gets to be old enough to vote. Then here, the taxi driver was an immigrant from one of war-torn African countries. He and I had a great conversation until the subject of 2008 election came up. He went off on a conspiracy theory that each presidential election outcome has been predetermined by the “GOVERNMENT”. Trying to be a good American (and safeguard my son’s impression on this new revelation of the American voting system), I got into a less than pleasant discussion with the driver. At the end, I failed to convince him as he pointed out that people elected Al Gore, but the “GOVERNMENT” already decided to make George Bush the president.

Even though the taxi driver was an immigrant, I would not be surprised to hear a similar cynical view even from a non-immigrant. There are many good reasons and excuses to why people don’t vote. Nonetheless, I want to inspire all Americans (especially my fellow immigrants and former refugees) to vote.

The poor Mexican immigrants risk their lives across the south border of the U.S. in hope to become Americans. Like them, I and my fellow former Cambodian refugees risked our lives crossing the minefields and bullets to get out of Cambodia. Therefore, it is profoundly important for those of us who are Americans (naturalized or born) to honor our American voting privileges.

To my fellow immigrants, I am asking you to leverage your past and difficult journey to lead and inspire all Americans to vote. Your voices and actions in the American election process are extremely crucial because when the world sees you in the U.S., the world sees the U.S. as a great nation, the land of the ultimate DIVERSITY.

(If you enjoy this posting, please share with your friends. A force that makes the world a better place can definitely use your help.)
Posted by Kilong Ung at 3:11 AM